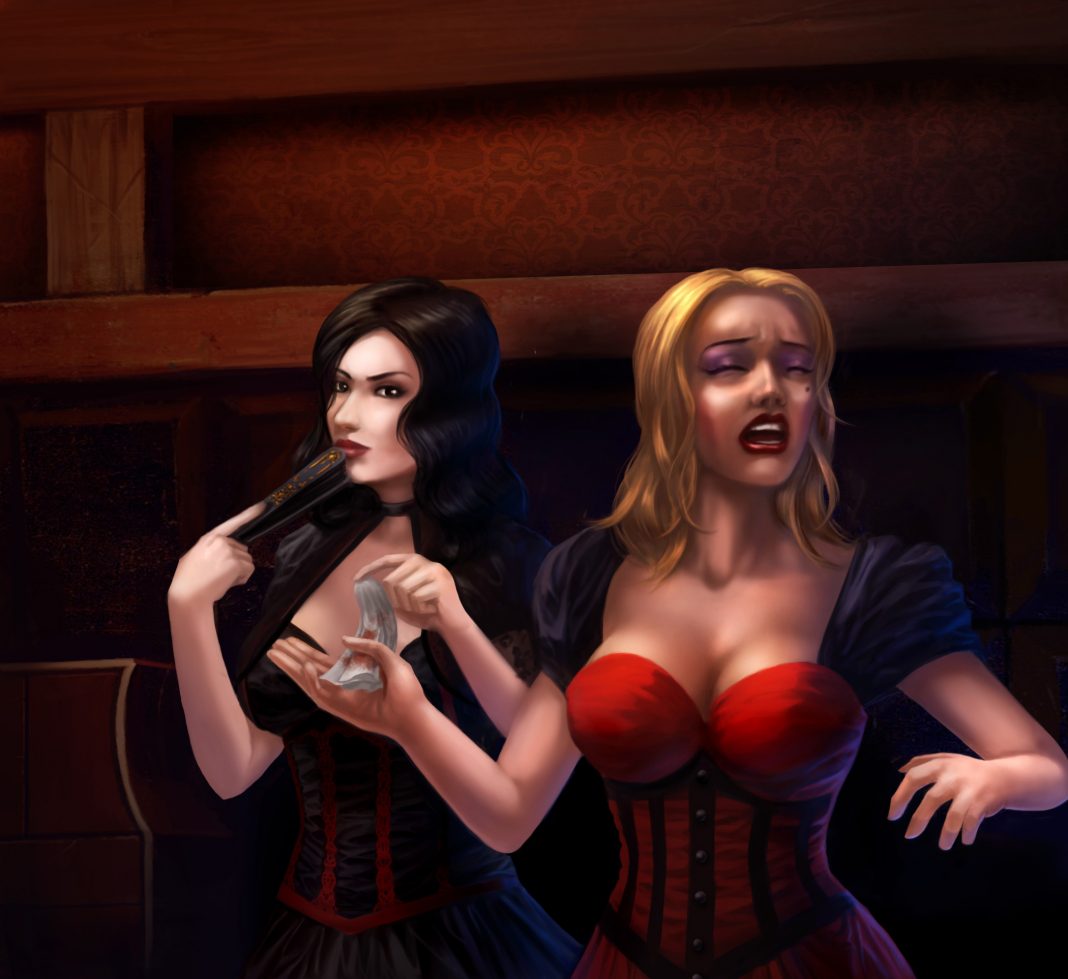 Lula Morgan sat at her mahogany desk, waiting with what would appear to be utmost patience. Inside, however, she was bursting with anticipation.

The door to the office slammed open, her bothersome stepmother storming inside, wearing a fancy red dress covered in black dust. “And I thought ranches were bad! At least they’re outdoors, and we can hire reasonable, honest folk to do the work. You have vagrants down there in your dusty old mine.” She huffed, then smirked. “Of course, those would be the sort attracted to working for you.”

“At least they’re not the ones attracted to me, my dearest stepmother,” Lula said, mirroring Lillian’s smirk. “Besides, those vagrants will bring in more profits than your pitiful ranches could ever produce.”

Lillian laughed hard. “Oh, that’s a good one, Lula. You’ve been working on your humor I –”  Her face flushed as she took two breaths in, without exhaling. She covered her face with her cupped hands and let out a loud sneeze.

“Oh my. That cough sounds nasty. I do hope it’s not that dreadful sickness I hear has been circulating around town,” Lula said. “You should see Dr. Ashbel.”

“I’m not sick, you buffoon. It’s the dust from your pit of a mine.” Lillian twitched her nose a few more times and sniffled.

All went according to how Lula had envisioned this meeting. Setting up the mine tour was simple. Ensuring that one of her miners used the auto-digger to douse Lillian in dirt was likewise easy enough to arrange. The sight of Lillian’s soiled and ruined dress would be icing for the cake, if Mr. Hawley’s promises proved true.

Lula stood and circled the desk, gingerly plucking the handkerchief that Mr. Hawley had left from the desk’s corner with a gloved hand. The Ringmaster didn’t tell her the specifics of how this would work, only that she had to make sure Lillian used the handkerchief. Though Hawley assured her that it was meant only for Lillian, she would still burn these gloves once she had departed. Trust only goes so far. “Here you are, Lillian dear. You may use my handkerchief,” Lula said. “And if dust and dirt bother you, you could always turn over the company operations to me. I could arrange for — how was it originally put to me? — Oh yes, some ‘responsibility’ that would be a little less tedious for you.”

Lillian glowered at Lula, as she snatched the handkerchief. She blew her nose hard, and slapped the cloth back down hard on the desk. Then she gave a forced smile. “I’d sooner die. Now let’s take a look at the books for your little operation, shall we?”

“Of course.” Lula reminded herself to call in one of the miners to extract that handkerchief and throw it away later. She spun back around her desk to oblige Lillian. Soon enough, she wouldn’t have to deal with her stepmother any longer.