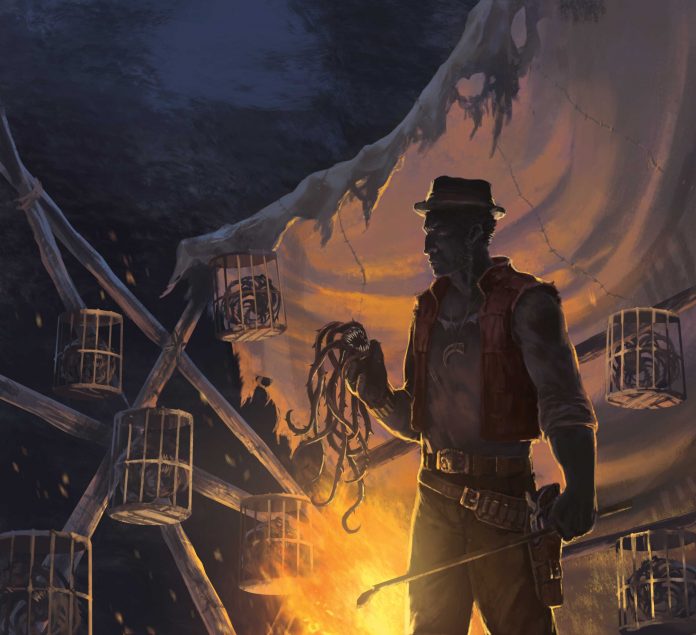 Jonah Essex knelt by the creek, trailing his hand gently through the cool, dark water. It was near sunset, and twilight scattered dull orange rays across the valley floor. Soon the warm colors would fade, giving way to the blackness of nightfall. Everything fades, he mused, lifting his hand from the water. Everything dies. The evening breeze blew around him, and he smiled as it caressed his wet fingers, sending small chills down their length. But death is only the beginning of the cycle. The sun’s light would be born again tomorrow, with a chance to blaze all the brighter.

His camp was modest, little more than a campfire and sections of wooden poles with a tattered wool blanket draped over them for cover. A series of small steel cages hung from the posts, about a dozen in all. Most of them were still, but one swayed gently on its tie. The fire dimly highlighted a series of appendages slowly squirming behind the bars, their small barbs scraping against the metal. Jonah walked to the swinging cage, sliding a thick rawhide glove onto one hand as he did. He opened the latch and gripped the writhing mass, slowly pulling it from its enclosure into the light.

His gloved hand cradled the tumblebleed’s head, an eyeless, circular knot with two rows of small, spiny teeth. A set of ten barbed, vine-like tentacles sprouted from all sides of the creature, hanging motionless in the evening breeze. Occasionally, one of the limbs would twitch, as if flexing its muscles, before falling slack once more. “Beautiful,” Jonah said, staring down at the abomination.

When he had collected them earlier in the day, the beasts had just fed, gorging on the blood of several cattle that had strayed from their herd. He had found them resting in a small patch of brush near the carcasses in a torpor. Most wouldn’t wake for hours yet, but when they did they would be hungry again for the taste of fresh blood, and he would steer them toward an ample new supply.

The creature shifted in his hand, its mouth opening and closing with a tiny growl. “Patience, love,” Jonah said, as he placed the tumblebleed back in its cage. “We will all have a role to play in the events to come.” He latched the door with a grin. “You will bring death.”

He turned and stared at the horizon. The sun had fully set now, falling behind the rocky line and into darkness. “And from death, there comes a new beginning.”