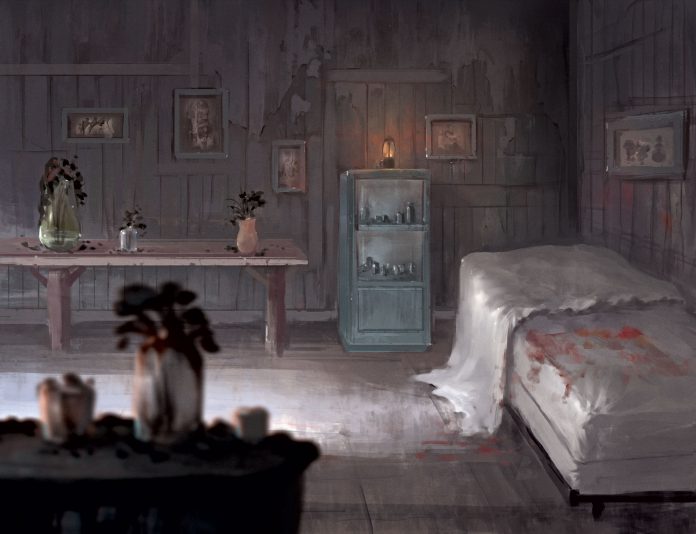 “I am very sorry to keep you waiting!” Karl Odett closed the door to his office and hurried into the room, smoothing his ill-fitting green vest and willing his lips into the most caring smile he could manage. He smoothed his oily hair to the side with one damp palm and took a seat behind his desk. “How may I be of service, Mrs. …?”

“Fisher,” the woman started, her eyes pensive. “Mary Fisher.” Her hands fidgeted nervously on her lap, and her face wore several creases of worry. “My husband has gone missing, and I was told that he might have been brought here. His name is Arthur … Arthur Fisher.”

“Oh, my, how terrible!” Odett steepled his fingers and leaned forward on the desk. “And what makes you think he is here at the Sanatorium?”

Odett plucked a slightly wrinkled white handkerchief from his breast pocket and handed it across the desk. “It’s alright, ma’am. Take your time.”

“Thank you,” she said, dabbing under her eyes. “You are too kind.” Composing herself, she continued. “He had the sickness … the same as a lot of folks in town. I went to visit him at the tents last night and he was gone. Someone said he might have been brought here for treatment.”

“Certainly possible. Our secluded location and clean air are just the thing to cleanse the body and spirit! But I am afraid your husband’s name doesn’t sound familiar.”\

“Could you please check … just in case?”

“Of course!” Odett sighed under his breath as he reached into a desk drawer, pulling out the first papers he could find. The pages were blank but he studied them intently. “Hmmm … there is no record of a Mr. Arthur Fisher here. Believe me, I know every patient that walks through these doors. I care for them as if they were my own, and each has a special place in my hear–”

Suddenly the door burst open behind them, and a ragged woman stumbled into the room. Her hair was a mess of tangles, and only a dirty blue hospital gown covered her lean frame. Her eyes darted around the room, falling on Mrs. Fisher first.

She fell silent, her eyes growing wide in terror as they fell on Odett. She turned back to the doorway, but found it blocked by a behemoth figure in faded blue overalls who nearly filled the entire doorway with his bulk. With a fluid motion he reached in and scooped up the girl, slinging her over one massive shoulder. She kicked and flailed against his grip, but the goliath stood unmoving.

“Well, Mrs. Fisher,” Odett said, rising from his seat, “it seems you will get your wish after all.” The other woman stood frozen in horror as he addressed the man in the hallway. “Horace, put Mrs. Fisher in the upper ward, so she can be close to her husband.”