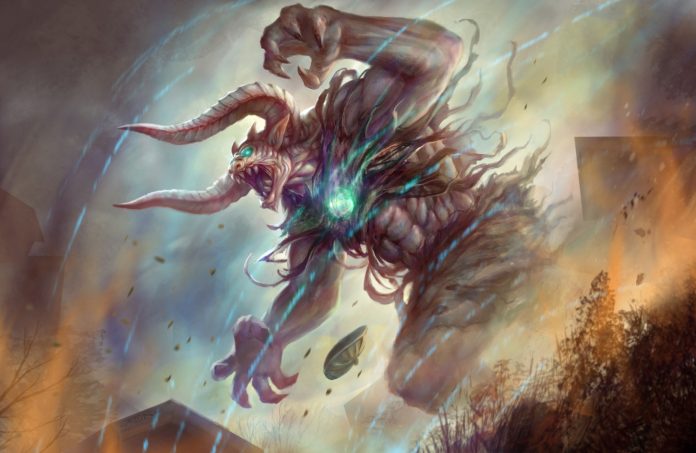 Kevin Wainwright entered Ivor Hawley’s private tent to find him seated at his desk. Kevin wrung his hands, as he knew Ivor’s plans were coming to a crescendo … a violent, bloody crescendo.

Ivor responded by ringing a small bell on the desk with his ebony walking stick. The dull, low tone rippled away from the tent and out into the world. Kevin let out a slow breath. He knew who the bell summoned, and despite the many times they’d met, he’d never felt comfortable. After a minute’s awkward silence, the tent flap rustled open. Ivor beckoned to the second visitor.

Tyxarglenak scuttled inside. His talons scratched the dirt, and he paused to sniff the air. Then, Tyx approached Ivor’s desk and slowly clambered upwards. Once on top, he swiped at the air in front of Ivor and hissed.

Kevin watched the display with mixed confusion and contempt. “Is there something Tyx can do for you that I cannot?”

“I’m not sure you have the heart for this task, Kevin.” Ivor smiled as he opened a desk drawer. The object within lit the tent with a wispy green glow. Ivor picked up the orb and held it up, staring with wonder at the faint image of the beast within it. “I’ve been staring at this for days, and its silence grows tiresome. I think it’s time to let Tyx play with the ball.”

Tyxarglenak clicked forward. Ivor touched the orb to the front of Tyx’s chest. At once, the orb started to hum, with Tyx humming along in harmony. Green light flashed from the orb, and Tyx’s glowing eyes turned from red to green. The orb sank into Tyx’s chest, and gradually began pulsing with a regular rhythm. A heartbeat made visible.

Ivor rose. “Ah. Very pretty. But I think we can do better than a walking Christmas ornament.” He placed his palm on the orb. Kevin noticed an open wound on Ivor’s hand, slowly oozing dark green ichor. Ivor spoke a brief chant, and a jack of clubs momentarily appeared in his hand. Bolts of green lightning erupted from the orb and surrounded Tyx. Where they touched flesh, it bulged and swelled. Where it touched tooth and bone, it hardened and sharpened. The desk groaned under the additional weight.

Kevin stood fascinated, but Ivor pulled him aside. “Come. We must quickly take him out to one of the storage tents.” Ivor looked at the demon on his desk, now twice its former size. “I suspect this space will be cramped in very short order. The orb holds the power of an ancient guardian beast. I suspect their new partnership will greatly favor the slavering bloodthirsty titan over the tiny, somewhat cuddly imp.” Ivor’s eyes surveyed the transformation with wonder. Kevin restrained a shiver at the erupting bulbous mass of thrashing muscle.

Together, they managed to get Tyx outside just before he became too big for the doorway.