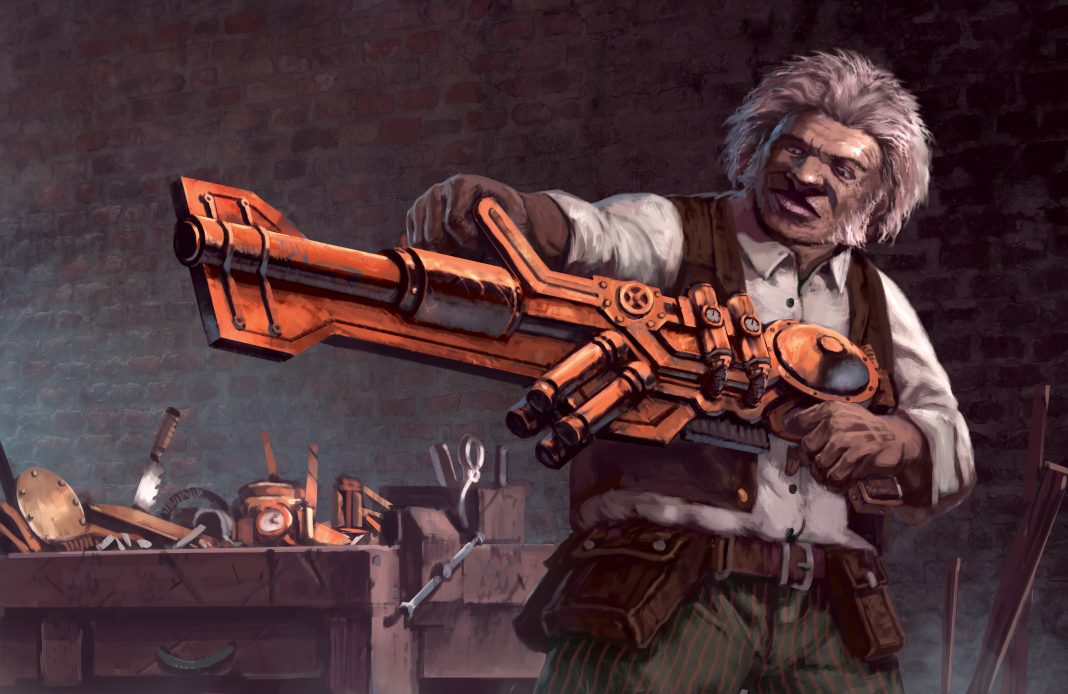 Snick-CLICK. Elander Boldman ratcheted the lever back as he prepared to obliterate a barrel placed at the far end of Morgan Research Institute’s courtyard. Luke, the errand boy, scrambled for cover.

Elander glanced down at Luke cowering behind a storage bin. “S’best you stay there for now. I’m nearly done with my new Aetheric Shockwave Inducer,” said Elander. He continued adding and adjusting components.

“Aetheric – means purified gases. The ghost rock in this chamber expands, concentrating the pressure of the aether. In turn that forces out …”

“Gotta run, Mr. Specks needs this auto-revolver, pronto,” said Luke as he quickly grabbed the weapon and ran. The door ricocheted against the wall and stopped ajar.

Intent on both his monologue and continued assembly, Elander failed to notice Luke’s exit. “…the aether. Or at least tries to. I’ve blocked off the chamber, so it has no place to go. The energy builds up and then disperses as a wave of energy, stunning all in its path. Easy peasy, right?” Elander turned to find that he was alone. “Where did that boy get to? Just when I need him to deliver this to Shane and Graves, he up and disappears on me.”

Through the open door, Elander heard panicked screams of Gomorra’s townsfolk fleeing the Fourth Ring and their blighted minions. He turned and stepped outside with the prototype weapon still in his hands.

He and the blighted saw each other at the same time. Elander shouldered the gun and, after a quick adjustment, squeezed the trigger. The blighted paused for a moment, sniffing at the air between he and Elander.

Only a faint noise emanated from the inducer. Again Elander fired, and once again the gun emitted a weak sputter, but a blast of air sufficed to spin the blighted sideways as he stepped forward. The enraged blighted whirled back around and charged toward him.

Elander dodged the blighted’s charge and half ran and half scrambled towards the town square, where he heard the staccato chatter of William Specks’s auto-revolver holding an advancing mob of abominations at bay.

Beauman called out to Elander. “Duck!” Elander obeyed as a fusilade of bullets slammed into the assailant’s flesh. He looked up to see William motioning him towards the town square. “Over here Elander. Whatever you got I sure could use, starting with activating the force field.”

“Force field? I thought YOU signed that out. No matter, that’s why I made the Aetheric Shockwave Inducer.”

“Well, the ghost rock expands, concentrating the pressure … You know what, how about I just demonstrate.” Once again, the gun sputtered and gurgled. Elander twirled a dial and recocked the lever. Nothing. Elander peered into the ghost rock chamber. “Jammed again.” He looked around and found nothing useful.

“Elander, we don’t have time for testing. That thing has to work now.” Drew resumed firing at the massed abominations.

Once again Elander scoured the ground for something, anything to use to lever the ghost rock into the firing chamber. Holding the weapon in his left hand, he unfastened and withdrew his belt with the right. Bracing the gun on the ground, Elander took the belt’s prong and inserted it into the chamber, nudging the ghost rock pellet forward. He repeated the priming routine and raised the gun to his shoulder. This time, the gun emitted a throaty roar over the unmistakable howl of igniting ghost rock. Rumbling shook the area as air shimmered and rippled towards the blighted, knocking down the mob’s first wave. Elander kept his finger on the trigger. Specks had to cover his ears, but watched in astonishment as wave after wave of the blighted fell writhing to the ground. Eventually the twitching ceased. The area was still.

“That … that is what an Aetheric Shockwave Inducer does,” said Elander Boldman.