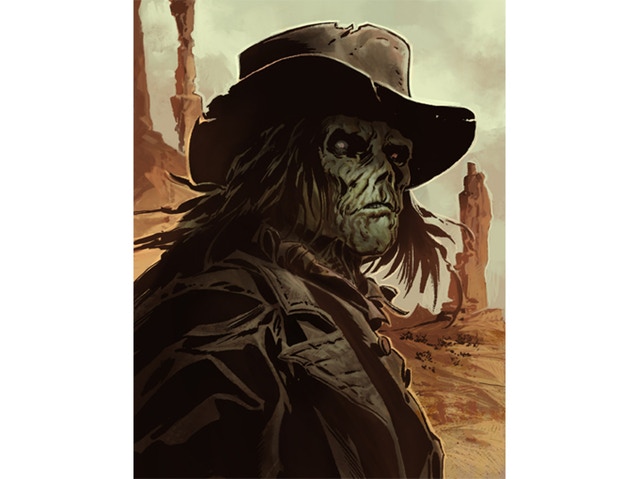 His skin was starting to blister under the ferocity of the omnipresent heat. Padre Ernesto de Diaz wiped sweat from his eyes, but fresh drops clouded his vision every time he cleared his brow.  There was fire everywhere, almost as if the Earth had spilt herself open and started bleeding geysers of flame over all of creation. Seas boiled and mountains turned into ash before the faithful man’s sight. The Padre helplessly watched as all the world burned in a swath of red. The only thing Ernesto heard above the roar of all-consuming flames were the screams of his dearest friends and brethren-in-arms as they too were swallowed by primal fire.

Padre Ernesto lent his voice to the screaming of the burning and dying as the world continued to vanish in a Hellish blaze. Color faded into one endless sprawl of red. The priest concentrated as he deciphered an anomaly in the blanket of dancing crimson. A glob of white dotted the top of a distant hill. Squinting, the priest spied a gaunt rider mounted on a sickly pale horse that stood unscathed amidst the burning world. With an evil grin and a devilish cackle, the rider looked down on the cleric, searing a hole through the man’s heart with cold lifeless eyes. Jasper Stone’s vile face was the very last thing Padre Ernesto de Diaz witnessed before the flames completely devoured him.

There was a second of calm peaceful black and then Ernesto awoke. A different kind of black welcomed him back into the waking world. He had left the dark shroud of unconsciousness and traded it for a room full of genuine shadows. Small traces of starlight pierced the windows of the Louisiana hotel room, but otherwise the gloom enveloped him. He fumbled around on the nightstand beside his bed for some matches and the oil lamp, but a most unappealing tactile sensation halted his efforts.

As the priest’s heart returned to a normal rhythm, he became aware of a soggy cold clinging to his body. He heard the wet sloppy sound of soaked bed sheets alternately clinging to and releasing from his clammy skin. The weary man patted his face and felt the sticky sheen of cold sweat. The springs of the bed beneath him squeaked and squealed as he tossed the sopping wet blankets to the floor and swung his legs over the side as he assumed a sitting position. He gasped as tried to shake off the throes of the nightmare. That only made matters worse as his anxiety now dreaded the coming days ahead.

“Padre?” came the tired sound of Coot Jenkins’ voice from out of the dark.

A flare of light beat back the all-powerful darkness enveloping the hotel bunk room as the newly awoken prospector lit a match and caught the wick of his bedside oil lamp. The old man held the soft glowing lamp close to his lidded eyes and squinted through the darkness to assess his troubled companion. After a few moments of sustained silence, he got out of his bed and hobbled across the creaky planks of the hotel’s second floor.

“I’m fine, compadre. Go back to sleep,” said the Padre. He was never any good at lying, and with his wits cast leagues away, any hope of making his words sound convincing was a thing of total fantasy. He shuddered in a cold sweat-induced tremor as he tried to dissuade his friend from checking on him.

“You was tossing, turning, and hollering something bad. I’d say you’s anything but fine,” Coot said. He kept his voice low enough to prevent waking the other person in the room. Coot gingerly stepped past the pale corpse-like form of Rafi Hamid as he made his way to the Padre’s bedside. The floor creaked and groaned with each footfall, but the sounds could not rouse the prospector and Padre’s other roommate.

“No. No, please go on back to bed. I’m fine, I swear,” the Padre said. His weary pleading fell on deaf ears as Coot came to stand in front of the sweat-drenched man of faith.

“Don’t the good book say something against lying?” Coot said. He grinned a gummy grin at the Padre and proceeded to look over the man sitting in the middle of the disheveled bedspread. Coot reached down to touch the linens and mattress and his hand quickly recoiled at the feel of freezing sweat. “Good God, are you soaked through to the bone? Should I call for the doctor?”

Ernesto let out a heavy breath and waved off his friend. “No, this is not the fever or any sickness of the flesh,” he said. He lifted up a bundle of soggy sheets to punctuate his statement. “It’s a troubled spirit that’s got me awake.”

“I can imagine that you got a lot on yer heart. More than usual, I’d wager to say,” Coot said.

“Sí,” responded the Padre. He let a few heartbeats pass before he slid the single drawer of the nightstand open and reached inside. He pulled out the mason jar containing the infamous Gettysburg bullets and looked at the little pieces of lead with a swirl of fear and reverence. “Since we got these unholy bullets, I’ve been having nightmares. I can feel them…”

“Feel them?” asked Coot. He arched a bushy grey eyebrow as he echoed the words.

“They’ve got a heat on them, an evil heat. It is like they are calling to every bad and twisted thing in the territory. We are being hunted and have a big target on us that grows larger every second we hold onto these bullets,” said the priest. He nudged the mason jar with a resentful finger.

“Yeah, I know what you mean, friend. The trail behind us since we left the bayou feels like a hundred eyes on our back,” Coot said. He took a beat to consider the bullets in their humble glass coffin. “I’m guessing you have a thought that’s chewing at you.”

“I should go on alone. These bullets are a danger to all of us. No sense in everyone being at risk,” said Ernesto.

“You are half right. Splitting up is the best course, but no way in Hell you are going it alone. You are stuck with me, sir,” Coot said.

Ernesto almost launched an objection, but a shift and creak of the dusty hotel floor drew both his and Coot’s attention. The two men regarded the sleepy-eyed form of a just-awoken Rafi Hamid. The lawman stood, stretched, and then looked expectantly at his companions as he cracked the stiff joints in his shoulders and neck.

Ernesto sized up his companions before seating himself at the room’s small desk. “I’ll leave a note for Jen and Nathan, letting them know to meet up with us in Tombstone,” he said.

Chuan “Jen” Qí waited at the hotel’s front desk as the concierge finished some business with the guest in front of her. New found uncertainty mixed with solitude weighed upon her like a load of newly mined iron. She tapped her fingers on her thigh to help pass the uneasy moments. Rueing the nervous tic, Jen struggled to restrain her fingertips from brushing the butt of the gun holstered at her right side. The man in front of her at last bade his farewells and departed from the desk. Jen’s eyes flashed back to life as the present regained its hold.

“Checking out ma’am?” asked the concierge. The pleasant man with his neatly waxed handlebar moustache greeted Jen with a well-practiced visage of politeness and attentiveness. He could have made anyone feel as though they were at least three times more important than they were simply with the pitch of his voice.

“Yes,” said Jen. She pulled the room key from one of the front pockets of her waistcoat and slid it across the burnished walnut counter towards the concierge.  She took a moment to glance back at the staircase in the hopes that her vanished traveling companions would make an appearance. Her heart lifted for a split second as she saw motion at the top of the stairs. To her dismay, it was only the lone figure of Mr. Outang swinging from one railing to the other as he descended to the hotel’s main floor. The primate cast Jen a frown and offered her a negative shake of his scruffy orange framed head. Any hopes that he could have found traces of the Padre, Coot, and Rafi where she had missed them were now laid to rest.

“I hope you had a good night’s sleep, ma’am,” said the concierge. He plucked the key from the desk, cradling it with the tenderness that one would hold an egg. “Ah, number six. Your bill is all settled. But there is a message for you.” He stowed the key in the mailer index behind the desk. The man then pulled a small folded piece of paper from the cubby where he had just returned the key. He handed the paper to Jen with a smile and a slight flourish.

“I slept fine, thank you,” Jen said. She did her best to sound more than lifeless as she passed the social formality, but anxiety and distraction made propriety all but impossible. She turned to the side and unfolded the note. The second she saw Padre Ernesto de Diaz’s precise handwriting, she took a small step back from the desk in an effort to maintain some measure of privacy.

Mr. Outang came up beside Jen and patiently waited for her to review the small piece of correspondence. Though he did not vocalize his curiosity, the inquisitive glint in his eyes spoke clearly enough.

“It seems I’ve found them,” Jen said after reading the note. “Or at least where they are headed.” She leaned into her compatriot and lowered her voice so that only Mr. Outang would hear. “The Padre wants to split up. He has…it…and Coot and Rafi are with him. They are making their own way back. We’ll meet up in Tombstone.”

Mr. Outang sniffed, huffed and grunted. He momentarily folded his arms over his chest before taking comfort in a long swig from the jug slung over his shoulder. He made the customary offer of a drink to Jen, who, as always,  refused with a wave of her hand.

“I don’t like it much either. A face to face conversation would have been nice but be honest, if you’d have known they were leaving early would you have let them go?” Jen asked.

Mr. Outang only grumbled with a tone of dejected acceptance and consoled himself with another sip of spirits.

Jen turned once again towards the concierge.  “And what of the other man in our party?”

“Excuse me ma’am? The Black gunslinger? He bought my best mustang and lit a shuck for parts westward. But it seems that there is a second message for you,” said the concierge. He proffered a sealed telegraph envelope.

Jen cautiously took the message and opened it. Her eyes widened as she scanned the telegraph:

She was lost in the ink on the page until some low prodding grunts from her companion returned her focus. “It’s from Stone. He says let’s finish this in Canyon Diablo Crater at week’s end. I think that’s back in Arizona,” she said. “As for all of our friends, well guess we first have to find ‘em all again.” Jen crumpled the paper and tossed it to the ground. Without another word she motioned for Mr. Outang to follow her.