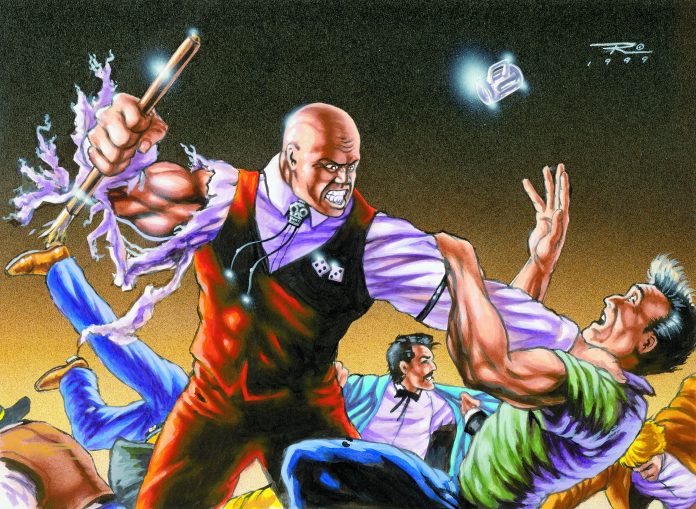 May, 1882
Lane Healey and I planned to rendezvous two weeks later in Santa Fe. Now, as I approached the San Miguel church, I could see the simpleton standing in its shadow looking impatient.

Good. If he was irritated, he’d be easier to manipulate.

On the long journey I’d had a lot of time to think. Why had Mr Baird sent Healey and the Tonton in the first place? He could have quickly supplied me with the ticket. He could have had me bring the book to his contact myself. Instead, he has me meet this idiot? Why?

Unless he thought I might not make it out. That’s what the Tonton was for, to get the book out should I fail to escape when the Court moved against Lady Evangeline Boyet.

Maybe I was making too many assumptions, but my gut told me he’d known about the attack on Lady Boyet.

“Evening Pardner,” Healey said as he spat some tobacco onto the ground. “Sure took yer time gettin’ here.”

“I took the scenic route, and hit a snag in El Paso,” I replied while dismounting my roan horse. “Lone Star Rails wouldn’t accept Chuckles here.” My thumb indicated the hulking, but mute Tonton Macoute. “It cost a pretty penny, but a hired stagecoach got us as far as Albuquerque, where I picked up Cinnamon. Alas, Tontons aren’t exactly known for their equestrian skills. So I rode, he walked behind, and here we are. Now having come all this way, why don’t you tell me all about why Mr Baird wants me dead.”

“Final table. ‘Nines’ De Bore gets up and tries to kill me.”

“Tries to kill YOU? He was meant to kill Boyet!”

Honestly, it hurts just trying to imagine how dumb some people are.

“Thank you,” I say, enjoying his reaction as the penny drops. “And why, perchance, was I not informed of that?”

“Hey, don’t ask me.” He put up his hands. “I just got told to meet you in Tombstone, then take the book to The Cheyenne Club.”

“In Cheyenne o’course!” He spat another glob of the foul stuff. “Now, hand it over.”

“No. I don’t think I will. Goodbye, Healey.” I started getting back on the horse.

“And he didn’t say other things, so frankly what he said isn’t important anymore.”

“Well, dagnabit, I’ll make it your problem,” Healey said. I saw his right hand drop as he reached for his six-shooter.

I barely even looked at him, just raised my hand dismissively as a spectral card appeared, knocking him back with a mark of paralysation.

“AGAIN!? SERIOUSLY!” The frustration in Healey’s voice was almost laughable, and I would have left him there if he hadn’t next screamed a command to his hulking companion. “Tonton! Break his back!”

The Tonton looked at him, and then at me. You see, here’s the thing about a Tonton Macoute, when it comes to choosing their allegiance, they have a lot of respect for a powerful sorcerer. I looked back at the Tonton, then gave the nod. It lifted Healey straight up, and Lane’s protests turned to a scream of agony as the Tonton broke Healey’s ribs with a sickening crack, then tossed him back onto the hard ground.

She caught up to me eight miles out of Santa Fe. I was riding north on its eponymous cattle trail via the Cimarron route, planning to catch the Black River at Dodge. I’ve been assiduously studying Jokers and other strange arcana for long enough to know that when a rider approaches on a pale horse – you pay attention.

“The feeling is mutual.” I smiled. Tonton was hardly the most sociable travelling companion after all, and I appreciated the prospect of continuing my travels with an old friend. She was a welcome sight for more physical reasons as well obviously, or she would have been if I could shake Lady Boyet’s laugh from my mind.

“Pardner, have I got a story for you. Assuming this gentleman will let me.” She looked at the horse, who stopped and stared at me, before kneeling. “Well, will you look at that? Ever since I left Tombstone, this ones been leading me all over the west like he’s got a mind of his own. She looked down and spoke to her mount. “Are you saying that your final destination was Jonah Essex all along?”

The horse gave a snorted whinny. Looking in the animal’s burning eyes I could tell it wasn’t just a cremello with a wanderlust. As I said, you don’t ignore a rider on a pale horse. When the horse wants you to BE that rider, well, only a blunderbuss would ignore it.

Allie and I switched horses, and she told me of her journey since she rode out of Gomorra after stealing my new mount. She’d ended up in Tombstone herself but fled when that nasty business with the Earps and the Deadly Drifter went down. She saw Wendy Cheng take up the Marshall’s badge direct from Wyatt’s body, and well… like myself, she had no desire to be in another town with Wendy as the Marshall.

“Not this one.” She replied. “Took all the others, but when he touched this one, he flinched and left it. Where’s your destination hombre? I ain’t got a plan myself now I’m rid of ol’ fiery eyes.”

“Tally Ho there!” A new voice cut through the air, the two of us turned to see a lady in a red riding coat cantering our way with a brace of beagles at her heels. “Well met.”

Our new companion had the distinctive moniker of Christine Perfect, and as I would soon find out, she had more in common with Red Riding Hood’s antagonist, despite her crimson get-up.

Allie had already fallen asleep, and Tonton was keeping watch. The huntress sidled next to me and snarled in my ear.

“From behind. No talking.”

That was enough to start me coughing again.

“I don’t think I could manage right now.” I’d been feeling rough ever since leaving Santa Fe, but had put it down to just a bug, until the coughing started today. Always eight times.

Christine tilted her head back as she observed me. She moved closer then sniffed three times, lifting her nose higher with each sniff.

“And worse,” came another voice from nowhere.

I stood up in shock and backed away from Miss ‘What big teeth you have’. The new arrival stepped out of the darkness, dressed up like a native shaman despite a pale complexion that indicated a non-First Peoples heritage.

“Winona Rein-Breaker,” she said by way of introduction. “For the last two days I’ve been following the trail the manitous surrounding you leave.”

“Not the kind one such as you usually deal with. These eight are fuelled by sickness and blight. Do not bring them to Deadwood.”

“We ain’t going to Deadwood; we’re going to Cheyenne,” I said.

“Are you?” She asked. It was rhetorical. “Be careful in the Sioux nations. The four great Thunderbirds have arrived, and the spirits now enforce the old ways.”

“No technology works there now. No guns. No steam. Even clothes not made by traditional means come apart and rot.”

“Great.” I coughed.“I don’t suppose these helpful spirits of yours told you how I might get rid of this curse.”

“You may find what you need in Cheyenne, but I think your future has been tied up with that of the Crab now. Don’t bring the manitous to Deadwood.” She backed away into the shadows, and a few minutes later was gone.

“Goodness,” Christine said. “Is hunting with you always this interesting?

“Hopefully you won’t find out.”

I felt the book in my pocket. I’d been studying it on the way and learned a few things, but CURING a curse wasn’t the sort of thing Jokers went in for. Maybe the ‘interesting’ clientele of the Cheyenne Club might have an idea.

I had a feeling though, this time, I might need a little help from Lady Luck… 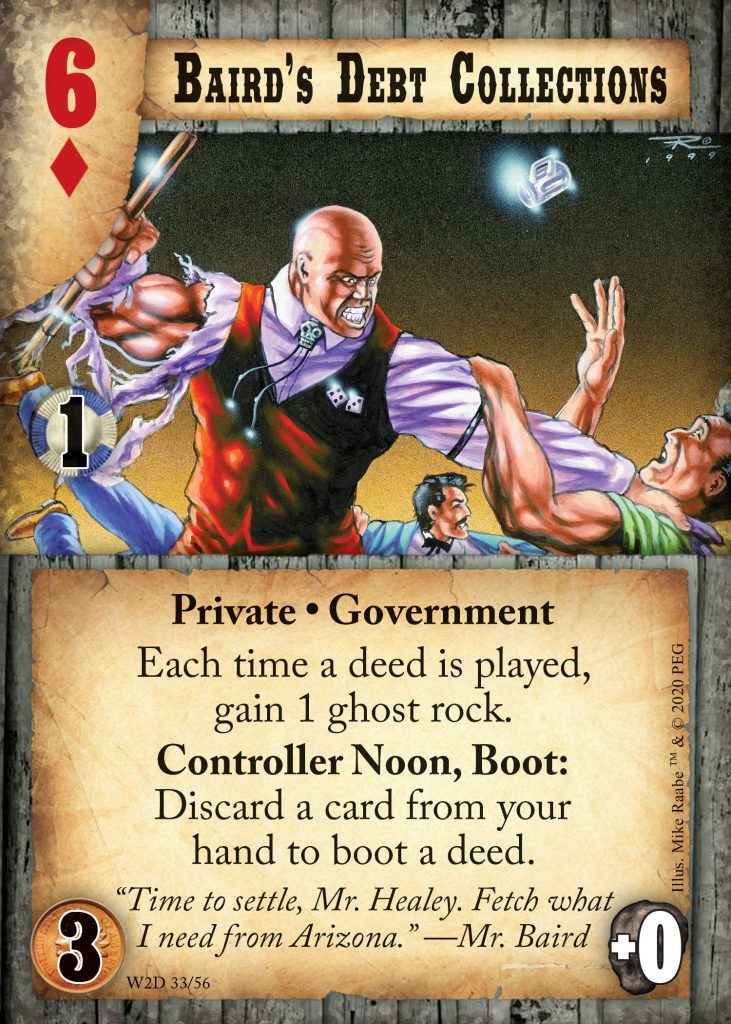