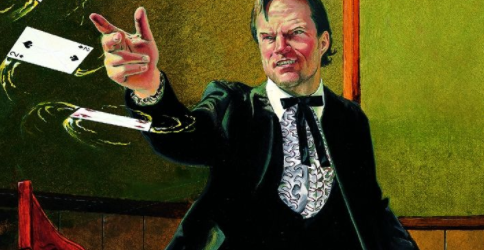 There is absolutely nothing lucky about the number seven—anyone who tells you that is a fool. As I have discovered over the years, the truly potent number is one higher. It came as no surprise to me then that the clock in the town square struck eight when I finally shook on the deal with Mr Baird.

“A pleasure doing business with you, Mr Essex. I’ll arrange for Mr Healey to make the delivery.”

Baird’s voice was characteristically calm with every single word carefully selected and finely polished before he used it. He possessed the confidence of a man playing with a stacked deck, who knew how every single hand would land before it was dealt.

I wouldn’t call it desperation that led me to Mr Baird’s, more that moment when you look at your stack of chips and realise that if you don’t make an all in play soon, you’ll no longer be in a position to recover. I no longer had Ivor staking my antes. Then Mario had vanished into the maze like a pickpocket in the Mersey Fog, leaving the once proud Sloane gang broken and aimless in his wake. Mr Baird seemed like the perfect lead for a new direction. He had the kind of connections you’d expect from a less than an honest broker. But even a player without a Joker up his sleeve would surely feel there was more than a hint of sulphur to him.

A boneheaded Yankee might have missed the signs, but I knew my suspicions about him were justified when I sat down. The shadows moved incessantly in the gaslight, that wasn’t strange in and of itself. Except that Mr Baird’s was one of the only establishments in Gomorra with electric lighting, powered no doubt by the ghost boiler I could faintly hear screaming in the background. As I sat down, I noted that he had already poured whisky for three, completely ignoring me when I asked who might be joining us. For a moment, I wondered if it would be Healey, but as we shook hands and the clock finished striking, my eyes glanced at the extra glass and found it empty.

“You understand Mr Essex, that this matter must be handled with the utmost discretion what with all the recent unpleasantness in Tombstone.”

“Not to mention, the rarity of your quarry, and the undue attention you would receive from The Court if you were caught.” His smile didn’t fit his face as it rode a little too far up his cheeks for comfort.

“I understand.” I stood up, “And I shall leave at once, I’d rather arrive with time to acclimatise before the Tournament.”

Mr Baird just nodded politely, and I turned to find the door was already open.

Just as he had promised, Healey was waiting for me at the Bayou Vermilion depot– with a ticket to The Bonanza for me and a hulking brute with lifeless eyes standing behind him.

“I thought Mr Baird wanted this done with, and I quote ‘utmost discretion’.” I snarled.

“Oh doncha worry,” Healey said in his insufferable drawl, “This guy is one of the Baron’s Tonton Macoutes – he ain’t gonna go thumpin’ things unless we tell him to. A pleasure to be workin’ with you ‘gain.”

“I’m sure it is,” I said. I picked up my bag while Healey hailed a buckboard. I settled in beside the driver, while Tonton awkwardly, but without complaint settled into the back cargo area. Rather than check in to the Grand Hotel, I ordered the driver to take us directly to the Crystal Palace so I could get right down to the business at hand.

It certainly wasn’t a pleasure to discover Wendy Cheng heading up security at The Crystal Palace. Having no desire to deal with that bloody woman again, a quick game against my Joker friend won me a long enough use of Imposter until I was long past her annoyingly watchful eyes.

The familiar sound of pasteboards riffling together greeted me. After I presented my ticket, a black eyed hostess with a white streak in her hair, escorted me to my table. Of the faces at the table, only two of them seemed any real challenge. Larry Swift, a fellow student of Hoyle with the unfortunate moniker of “Sevens.” By the by, anyone who believes that sevens are lucky, clearly still believes in luck. The other was Maurice Croker, a gentleman from the South who I suspect works for the Baron. Hearing him talk, it seems that he’d taken the place vacated when Doc Holliday met his demise. Just as well, I told myself, while matching hands with Holliday would have been a story to tell, Croker was by far the inferior gambler.

After I had passed the first round, I set about my real purpose for being there. The conversation at the table had consisted of vain boasting and idle threats. Clearly my best chance of locating my true prize would be to mingle with the other players. Over by the Faro table, I spied what might be a good place to eavesdrop. An older lady, pearls laced into her grey hair and clothed in an extravagance of purple and red, exchanged pleasantries with a stunning young woman with an accent more British than mine.

“I swear Lady Angeline, I think my memory must be going. I could have sworn the Confederacy was still going last I checked.”

“Well thank goodness you’re wrong about that, Carmilla.” Lady Angeline Boyet snorted a laugh. I don’t know how such a noise can be so attractive, only girls from the Home Counties surrounding London seem able to pull it off. “Goodness, it must be nigh on six years since that unpleasantness ended.”

“Oh and don’t I know it. Business is never better than in wartime,” said the older woman. “Speaking of which, have you seen Betty Sue?”

Lady Angeline peered around her companion “Isn’t that her over there, talking with Rosaleen Byrne?”

“Oh, dear heavens, so it is. Excuse me.” The Madam hurried after her prodigal whore, leaving me with a opportune pause to introduce myself.

“Yes…” She said regarding the table. “The way they shuffle the cards interweaves them perfectly, do that eight times…”

“And it’s back in the order you started in.” I smiled. “I was not expecting to meet another of Her Majesty’s subjects here.”

“Well, perhaps we shall meet again, good sir.” She smiled at me. As I watched her leave, my eyes caught sight of “Sevens” Swift, clearly upset with his loss, completely failing to sneak into a room at the back, tossing an empty bottle to the ground as he did.

Seeming to all the world like a prissy gentleman upset by uncouth littering I swept up the bottle and retired to a corner where I wouldn’t be disturbed. With the bottle as my conduit, I found myself riding the unlucky ‘Sevens’ mind.

He gestured drunkenly as he vented his frustration to what I realised must be an impromptu meeting of The Royal Court. Standing opposite him, laughing at his misfortune, was none other than Victor “Nines” De Bores.

Nines. Sevens. Of course – the Royal Court used cards to designate their rank. I cursed myself for missing something so obvious.

“Don’t you worry about yourself, mon cher.” Nines’ accent was French, by way of New Orleans. “The secrets I’ve learned from the first edition are going to make removing Lady Boyet, un jeu d’enfant – child’s play. Après ça, I believe a mere spot card will no longer suffice for Monsieur De Bore…”

No Monsieur, I thought as I broke the link, I don’t suppose it will… 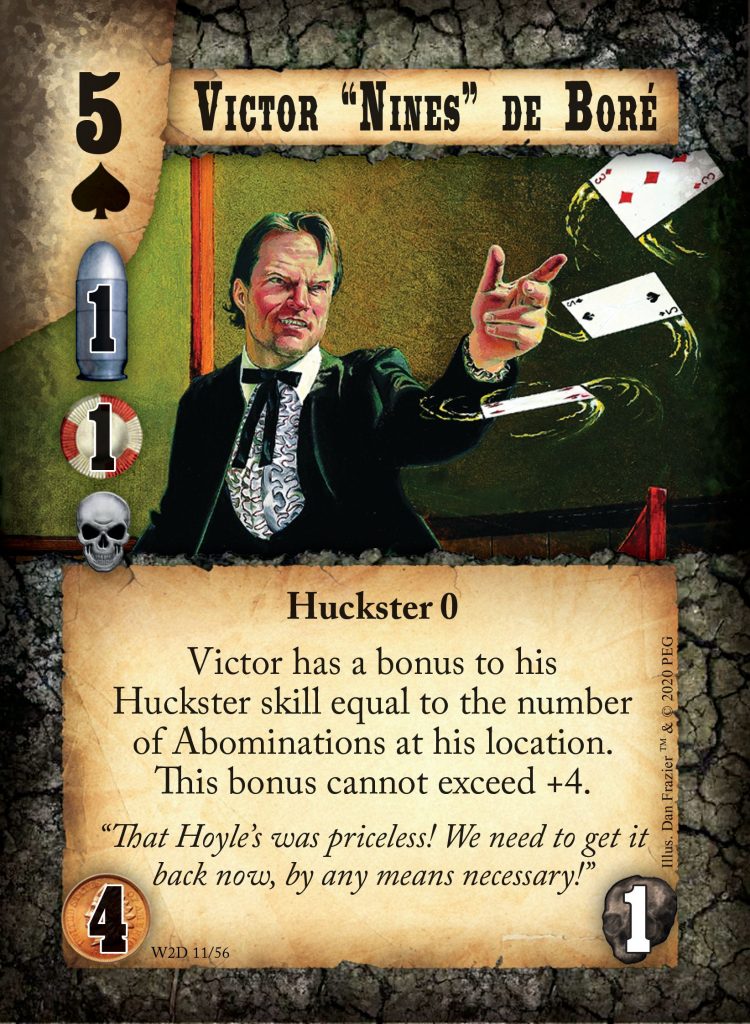 I spent the remainder of the first day keeping a close eye on Nines. Before retiring for the night, I ensured that Healy’s undead goon kept watch on Lady Boyet’s room at night. But it wasn’t until myself, Nines, and Lady Boyet found ourselves sitting at the final table, that the Royal Court went ‘all in’.

Honestly, I would have thought Nines was smarter than choosing to strike with the whole bloody casino crowded around watching the action, but his flair for the dramatic outweighed his smarts. In fairness to him, he waited until she was distracted by eliminating two other gentlemen with a single hand, triumphantly dropping a Queen high flush.

“You may have a Queen, but this will make me an Ace!” Nines said, and a crackle of black lightning appeared in his hand. He savoured the moment, enjoying the bystander’s screams of surprise before he launched it at her. She hadn’t been expecting it. Thankfully I had, and that little moment of vanity was all I needed to grab Lady Boyet and drag her with me into the shadows under a table. Nines wasn’t expecting that.

He also wasn’t expecting to have his head slammed into the table by the invisible Tonton Macoute that had been behind him the whole time.

“What was that?” Boyet asked.

“Forget it, don’t tell anyone what I…”

“Oh, don’t be daft!” She cut me off and said, “I learned to Shadowwalk when I was twelve. That Hex he cast, that was lost in the second printing.”

“Speaking of which,” I said and whistled to my undead and now fully visible ally. He picked up the unconscious huckster by the feet and began running towards us. “NO! Just the book!” I sighed, then seeing the creature didn’t understand, I reached into Nines jacket pocket and removed the book. I was about to tell Tonton to drop him, but that was the moment Sevens decided to make a play.

Caught between Seven and Nine, as I’ve said, isn’t the worst place to be.

“Give that back!” Sevens yelled. Five glowing cards appeared in his hand. I looked at Tonton and gestured my head towards Sevens. Tonton obliged by tossing Nines at him, and the two enumerated Hexslingers crashed together and then into the oak wood wall.

“And now, we run,” I said. As the saloon descended into chaos. The two of us pelted for the door only to find the very hostess that seated me lying on the floor.

“What’s going on?” She asked, reached her hand out for me to pull her up, and like a fool I instinctively obliged. The moment our hands touched it felt like something had punched me right in the lung. She grinned and melted away into smoke. Before I had time to take it in, a card table flew over our heads and crashed into the wall. There’d be time for figuring it out later, I decided.

I parted ways with Lady Boyet back at the train depot. Healey had left a ticket for me with the guard and instructions to meet him at Santa Fe. The cretin could have at least waited for me, but obviously had left in a hurry.

“The Lady Luck society will be regrouping north of town,” Lady Boyet said. “We’re the sworn enemy of The Royal Court, as you will be now as well. What you did today will put you in good standing with us.”

“Thank you, but gangs and I haven’t been a harmonious pairing for me lately.”

“We’re a club. Not a gang. And think about it.” She gave a coquettish smile “It would be nice to share a table again.”

I watched her leave for a moment then turned to Tonton. “Well, just you and me old fruit.”