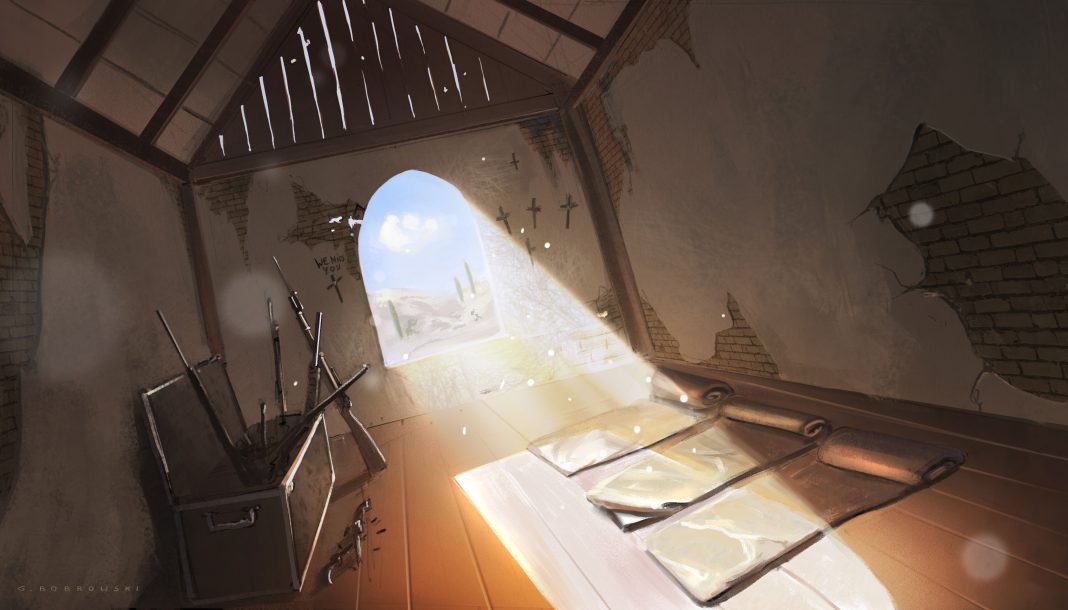 For the first time in hours, the streets of Gomorra were quiet. But this was a new kind of quiet.

With Montreal, the quiet was because Dave knew who to tell to shut up.

With Grothe, the quiet was respect for Abram as a good and devout man.

With the plague, the streets were quiet and deathly deserted.

However, this quiet was the paralyzing fear shackling the hearts of everyone around. The only sound was the snap of collapsing timbers, as the office of Dave and Abram burned.

With the fiery corpse of law and order at his back, Mario Crane stood defiant and victorious. “YOU LOUSY RATS!” his voice roared through the silence. “COME OUTTA YOUR HOLES!”

Front doors opened tentatively and boots clicked on wooden porches. The fire had woken them up, but the voice promised terrible consequences for tardiness. Mario’s eyes swept over them with inhuman contempt.

“I run this town now. You all work for me, ya hear? You do your jobs, and I’ll take what’s mine. Anyone steps outta line won’t live long enough to regret it.” Mario began pacing, boiling over with energy. “Let’s show your new boss the respect he deserves. On your knees! Right now!”

A few onlookers knelt on their porches, and a few stepped closer to be seen kneeling. One old man stood next to his rocking chair nearby, confused and hesitant. Mario drew his pistol and shot him through the chair, sending bloody splinters everywhere. Amidst dreadful screams, everyone kneeled.

“Good! The smart ones get to keep breathing. Stay kneeling until I say. I may let you stand … perhaps tomorrow.”

Benny McGill looked at the twilight on the horizon. Midnight was three hours away. He moved around others in the gang and waved to his boss.

“Boss? These folks are gonna need sleep at some point.” He saw dark anger on Mario’s face and recoiled. “I’m just sayin’ … we won, right? They’re ours. There’s no need to push it.” Mario’s hand jerked towards his holster at the comment, but only to put his gun away. Benny relaxed … a little.

Benny timidly approached. “I’m your man, Boss. Tell me what to do.”

Mario’s arm slung around Benny’s shoulder, and they moved towards a nearby lamppost. The gas light still glowed, white against the red of the flames. Mario’s hand gripped the leather of Benny’s collar.

“Benny, is it? We’re bringing a new era for this town to light. Do you know what the worst part about new light is?”

Mario’s hand swiftly moved to the base of Benny’s skull and slammed it forward against the lamppost, bending the steel at the base and collapsing his face around the metal.

The town seemed to take a breath all at once, but nobody moved as Benny slid noisily to the ground. For a moment, the crackling flames couldn’t drown out the thick, oozing gurgles as Benny’s lungs worked one last time.

Mario stared for a moment at his own hand, holding a scrap of leather and hair. His eyes grew wide and he flexed his fingers.

Then with a sweep faster than most could see, Mario kicked the lifeless body towards the bonfire. The body bounced off the wall with the force of the kick and landed on a wooden crate. But in the moment Benny had touched the first wall, he’d caught fire, and now so did the crate. Mario shouted, “Show’s over! All of ya, go to bed!” He swiftly turned and walked off into the night.

Jonah and Pancho Castillo quickly ran over and pulled the crate away from the wall of the next building.

“Bollocks,” said Jonah, looking at Benny’s pyre on the crate. “This weren’t the plan. Gomorra is our bleedin’ oyster, but we aren’t supposed to eat it before she gives up her pearls.”

Pancho smiled weakly. “This is no bueno,” he said as he reached into his cloak to pull out a cigar. After a second’s hesitation, he lit it using the Sheriff’s Office. “We need El Presidente, not El Diablo. He keeps this up, either they’ll all run away or sharpen their pitchforks and die trying to get free.”

Jonah looked back to Pancho and nodded. “It’s bloody awful is what it is, mate.” He looked at the receding form of their leader in the firelight. “I’ll have a talk with ‘im.”

I knew I’d be back here someday, but I never thought it’d be like this. The smell still hits me like it always did, that salt blowing in off the sea. It’s just as jarring now as it was every single day when I woke up. But today it’s the view that really packs a punch.

The street’s littered with debris and the occasional body. As far down as I can see, there’s nothing but more of the same, and not a sound to be heard but the wind, blowing through the shells of the buildings. No horses … no piano from the Killer Bunnies … no explosions from the Research Institute … no Willa Mae shouting after the kids … no laughter from the circus … no screams either, thankfully.

I walk along in disbelief, hoping to hear something, anything to show there’s still some life in this town. But there’s nothing … just ghosts.

Fear not them which kill the body, but are not able to kill the soul: but rather fear him which is able to destroy both soul and body in hell.

“The horses are ready.” I knew I couldn’t be alone with my thoughts forever, but the voice still takes me surprise. Guess I was getting used to the silence. “We should hit the road, if we hope to catch up with Sarah.”

I nod gently in agreement as I cast my gaze back to the ground, kicking a charred hunk of wood down the way a bit. “I know, I know,” I say. “I just … I never should have left.”

“Forget Crane. Regret’s the real killer out here. You did what you had to do. And if you didn’t, we wouldn’t know the truth about Adler or the rest of the Fourth Ring.”

“Maybe.” I know he’s right, but looking at what’s left of Gomorra, the guilt weighs a ton.

Lord, if thou hadst been here, my brother had not died.

“Look, Jack, I can’t thank you enough for what you did here … taking down Crane and all.”

He brushes me off again with a wave of his hand. He’s an uncommon type out here in the West … as proud as they come, but humble about it at the same time. It’s the mark of a hero … which makes his past even harder to believe.

“I admit it was fun for awhile,” he says, reaching in his vest pocket. “But I swear this thing’s cursed.” He holds his palm open, revealing the star I wore for so long. The cool of the metal strikes me as I pick it up and flip it in my hand. I think I knew the first time I put it on that it wasn’t meant for me. Something about it never quite fit. From the stories Wendy told, it seems that the Sheriff of Gomorra was a mantle that didn’t fit well with anyone. Jack probably wore it as good as anyone could have.

I chuckle lightly a bit. “I suppose that’s why Wendy wouldn’t come near the thing.”

“Abram, that woman’s seen more pain connected to that star than either of us will ever know. If you ask me, she’s made out best in this whole mess.”

“And you don’t know where she went?” I’m not sure why it matters. She was right there by me all the way when I started down this path. When that path led me back here, I guess a part of me thought she’d be there at the end.

“No. After what happened with Lucy, I think she’d had enough. The last any of us saw her, she was riding east. Wherever she’s at, I just hope she found a little bit of peace, you know?”

I thank my God upon every remembrance of you, always in every prayer of mine for you all making request with joy, for your fellowship in the gospel from the first day until now.

“Alright, I’ve seen enough.” I turn to walk back toward the horses, hitched to the post outside the Sheriff’s Office … or what’s left of it. “You sure you want to come with us, Jack? I imagine you’ve earned your ride off into the sunset too.”

“You know, I tried the happily ever after thing. Turns out it’s hard to be happy when you know everyone else is pretty miserable. Besides, it also turns out that mining’s pretty boring. Obviously, there isn’t much left to do here, so I might as well help you take Essex, Blackmore, and Adler down instead. Everybody needs a hobby, right?”

“He that is slothful in his work is also brother to him that destroys.” I recite as I mount the horse, pulling back from the post and pointing her north.

“The name of the Lord is a strong tower; the righteous runneth into it, and is safe,” he says, following suit.

I smile. He’s seen things here in Gomorra that go beyond Ivor and the circus, but he hasn’t seen the Fourth Ring like I have … or like Valeria and Sarah. Part of me wonders what he’ll think of all this when he does. But for now, I can’t help but feel hopeful knowing he’s with us. I can certainly see why Wendy chose to give him that star.

I turn it over in my hand a bit more as we head on down the road. It’s funny just how much this piece of metal has seen. My eyes look down to my side where Evanor bounces gently along the saddle with each of the animal’s steps. As I do, I’m reminded of the fact that the blades has seen even more. This is the right choice. The battle for Gomorra is lost, but maybe it was always meant to be.

Follow me; and let the dead bury their dead.

I grip it strongly in my hand one last time before rising up to throw it into the burnt ruins of the office.

Suddenly Jack stops, spinning his horse around to look back toward the southeast. He stares intently through the remains of the buildings, clearly looking for something in particular.

He continues to stare as he speaks quietly. “I thought I saw something at the ol’ Whateley place. A face in one of the upstairs window.”

I position myself for a look as well. While the building managed to weather the storms that ravaged this town in recent months better than anything else around, it’s looked just as lifeless as the rest of it.

“I don’t see anything. If someone else wants Gomorra, let them deal with that cursed place and whatever Nicodemus might have left behind in his wake. We’ve got our own demons to worry about now, Jack.”

He stared for a few moments longer, his keen eyes looking for any signs of movement. “You know what they say about old habits.”

I kick my horse into a gallop past the Research Institute, toward the city limits. I steal every glance I can as I pass, trying to remember the town we’d all given up so much trying to hold on to. But once I passed, I refused to look back. We did what we could for her while she lived. And now we’ll do what we can to avenge her, hoping that it wasn’t all in vain.