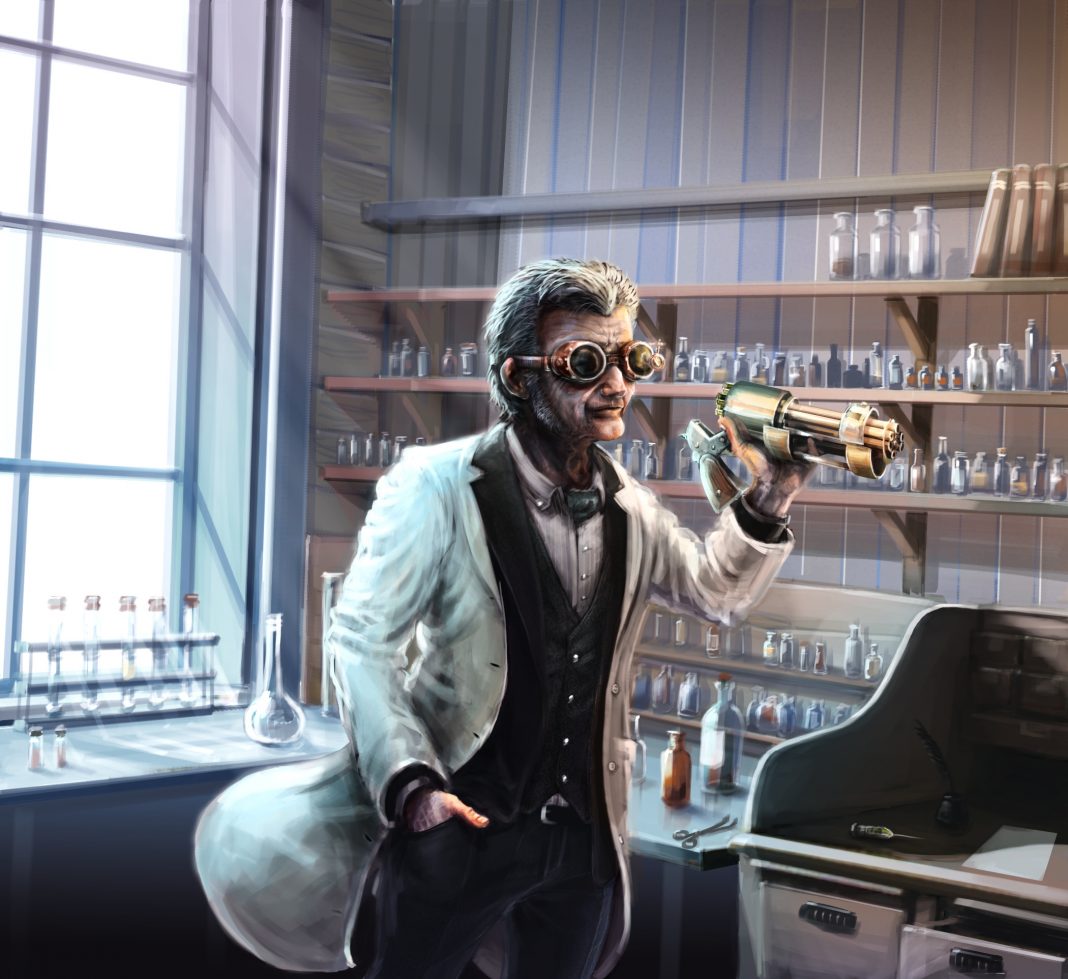 Drew Beauman surveyed the blasted remains of Hawley’s circus. He crept amidst the torn canvas and blackened posts, and paused once more to close his eyes against the memory of the titanic demon tearing into the town’s defenders. After a moment, he relaxed and studied the debris-strewn landscape.

He looked towards the setting sun. After dark, he’d have to contend with roving thugs… and worse. He’d come back again if he had to. His fellow Lawdogs had long since evacuated all human survivors, but Drew continued his search for an abandoned hero.

With a long breath, Drew shouldered his duffel.

“I’ll find you tomorrow,” he said.

Drew turned towards town – and a metallic glimmer reflected off his goggles. He checked his portable energy detector. The needle pointed towards a fallen steed. Once on the other side of the horse, Drew saw the faintest glow beneath it. He pocketed the detector and opened the duffel to take out a shovel. With a harsh grunt, Drew used it to lever the horse, revealing the dusty top of a riveted hat brim.

The last time Drew saw his creation, the demon Tyxarglenak had smashed it. The limbs were likely junk, but the head and chest contained the prototype ghost rock reactor, reinforced to contain the powerful fires that brought it to life. But as Drew excavated, he discovered the limbs hadn’t been wrecked, but instead were outright missing. As he pulled the main body out of the dirt and knocked off the larger clumps of earth, he saw the twisted distortion of a shoulder joint minus the actual arm. Drew smiled. When the demon attacked QUATERMAN, Drew thought he had seen it smashed. But if some or all of the limbs had been ripped loose and were at least somewhat intact, they would work better than the jury-rigged replacements he had brought with him. Despite the approaching dusk, he began searching in earnest.

Five minutes of ever-widening circles turned up an arm, dinged but serviceable. Knowing where the arm had fallen led Drew to a leg with a twisted knee joint. Drew sketched some lines in the dirt to show where the two limbs had fallen. With that, he found another leg – but guarded by a feral wildcat using it as a shield against the dusty wind.

Drew took out his auto-revolver. He usually confined his combat to the testing range, but now he made an exception to reclaim the parts he’d labored over for months. He crouched at a distance safe from sudden pouncing, and lined up his shot. He pulled the trigger – and instantly threw himself to the ground as bullets ricocheted off the tarnished metal and came back his way.

The wildcat snarled and bared its teeth, and Drew decided he would rather test the new replacement leg after all. He searched for a while longer, but couldn’t find the other arm. With a resigned sigh, Drew placed all the parts he’d recovered on a canvas tarp. He then dragged the collection towards one of the few intact circus wagons that he had repurposed into a makeshift workshop.

Drew studied his work. The new arm and leg stood out against the rest, still slightly dented but cleaned and polished. Drew set down the wrench and put his hand over the valve connecting the ghost rock heart to the pistons that drove the limbs.

He turned the handle. Harsh sea green light filled the wagon. The motors screamed to life, and then quieted down to their usual thrum. The eyes opened. QUATERMAN sat upright, and his eyes found his creator.

Drew’s breath caught. He had built a vocalizer into the original, but it had never worked.

Drew nodded back, but the light in QUATERMAN’s chest still held his eyes. A thought crept around his mind.

It had been bright blue before, hadn’t it?

He shrugged it off. “Come on.”

Drew handed over two six-shooters from the duffel. QUATERMAN took them with a fluid motion and slid them into his holsters.

The pair confidently moved down Gomorra’s darkened streets, the mechanical construct’s leg clicking a little with the movement of the damaged knee. QUATERMAN’s chest shone like a lantern. Drew was hoping to test QUATERMAN’s arrest protocol. In Gomorra, that search never took long.

A young tough wearing the Sloane gang’s signature red bandana was harassing an older couple. They had already handed over a sack of biscuits, but now the husband reached for a billfold in his pocket.

Drew pointed. “Assault in progress. Standard response, QUATERMAN.” This was a programmed behavior to challenge the criminal, and to wound the leg if they fled.

Drew covered his ears as the shot rang out from a foot to his right. A small dot appeared in the thug’s right eye and filled with blood. Both he and the sack fell to the ground.

Drew screamed. “YOU KILLED HIM!”

The older couple turned, and pointed at QUATERMAN. The man’s voice quavered as he spoke.

Drew heard the hammer draw back. He knocked QUATERMAN’s arm. The shot hit a lamp, and cloaked the scene in darkness. Drew heard the couple scramble away, and he called out. “Wait! I can explain!”

But QUATERMAN took two steps forward, arm raised for a third shot. Drew snaked his hand into the inspection panel, and turned off the main valve. The artificial man slumped into the wall, and slid to the ground.

Drew stared at his creation. “I can’t bring you in now. They’ll destroy you.” He fingered his shirt collar nervously. “I can’t show myself, either. Not until I can swear this was only because of the damage.”

Drew scanned nearby for anything familiar. The dark windows of the Dead Dog Tavern held promise of a private workspace. He grunted as he hefted QUATERMAN over his shoulder for the short trip.

After two hours of checking, Drew believed he had it worked out. There were several cylinders inside the head that were out of alignment. A few tweaks had meticulously put everything to right.

“I am… back.” QUATERMAN slid down from the bar and moved to the door. “Is there danger?”

Drew opened the door. “Yes. Many people are in danger. We must help them.”

QUATERMAN pushed past Drew and emerged into the street. He looked right and saw a man in the distance carrying a sack. QUATERMAN moved to follow, and Drew came up behind.

“What do you see?” Drew knew QUATERMAN’s eyes were unhindered by the dark.

“The man appears to have stolen goods.”

The robot moved into the street. Drew’s stomach went down into his shoes as QUATERMAN reached for his gun. Drew knew part of the arrest routine involved showing the weapon. He tried to keep pace with QUATERMAN. But the robot darted ahead, and fired at the man.

“No! You haven’t been told to detain him! What-”

Drew reached for the inspection hatch, but a steel arm swung into his stomach, throwing him against a horse rail two yards away. Drew tasted blood in his mouth, and he desperately grasped for his own weapon.

The robot took another step forward.

Drew raised his weapon. “I don’t want this.”

Drew fired. The bullet clanged against the reinforced chest plate. Drew’s eyes swam with nausea. He felt the steel grip of fingers pull him up by his jacket.

The blinding light from QUATERMAN chest overwhelmed Drew and he passed out with a whimper.

Drew’s eyes fluttered open. He realized he was still being held up by the back of his jacket. But the scene had moved. Now, he saw a man with a red bandana slumped on a porch. Sleeping.

Drew looked to his right. A steely claw held a gun – but the handle faced him.

From behind, he heard the flat tone of the voice he hadn’t ever gotten to work.

“Professor. This man is a known criminal. If he is permitted to continue, lives are at risk. If you attempt to arrest him, he may escape and alert others.”

The gun was pressed into Drew’s hand. “Kill him. It’s the most efficient way.”

Drew’s eyes blurred, but at this distance, Drew knew he would hit.

He looked at the thug. He tried to remember if he had seen the man before. He looked at the gun. It was an instrument of terror in the thug’s hands. Drew wondered what it was in his own hand.

He heard QUATERMAN’s urgent voice. “Professor. Do it now.”

Drew Beauman raised his weapon. His own voice was a soft mutter. “It is logical, Take every advantage you can get.”

He pointed the gun at the sleeping man.

He pulled the trigger.