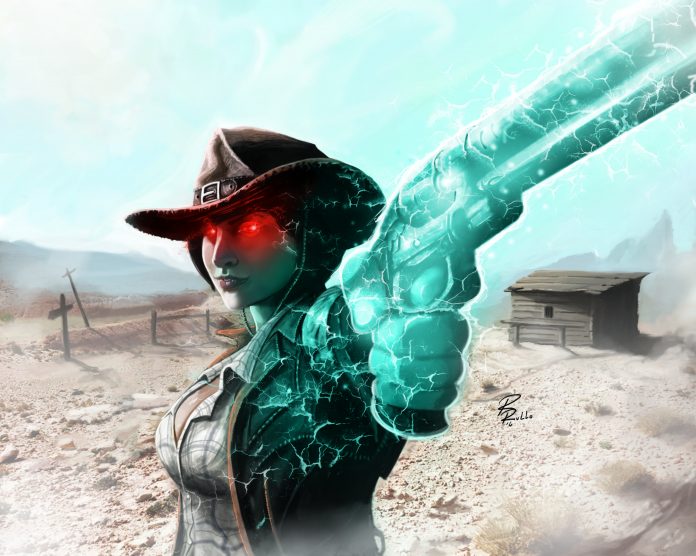 The Right Reverend Gregory Simon had just arrived in Gomorra, following his quarry. He had doggedly chased every whisper, zigzagging from Kansas to California in pursuit. The Reverend knew how things worked in roughshod towns like Gomorra, so he entered the cheapest saloon, seeking an idle man of means. He found a gambler named Barton, who said someone approached him yesterday looking for the coast road. Barton had offered a route and recommended an abandoned building outside town as a quiet shelter before the journey. The Reverend asked about a horse, as he’d arrived by stagecoach. Barton owned a suitable steed. The price was steep, but the need was dire.

He quickly rode through town, past the remnants of the North End, and out into open country. Soon, he found Barton’s recommended hideaway. It was an abandoned chapel; his hunt was finally over. The omen of a Godly house warmed his heart, but the nearby sand-scarred sign chilled it.

MONSTERS AND HUCKSTERS SHOT ON SIGHT.

He entered the chapel, brandishing both gun and cross into the dusty murk. So when he turned to a sound behind him, his hands couldn’t block the pistol butt as it smashed his throat. He staggered to the floor, coughing blood and phlegm.

Maria Kingsford stood over the man who had hunted her across eight territories, calmly berating him. “You are now as I was then. There is no help. There is no mercy.”

Her pistol started glowing with a bluish aura, but inside the barrel was a fire blacker than black. Reverend Simon tried to pray, but another bloody cough wracked him.

“You murdered an innocent girl, Reverend. She made a mistake. A horrible one that cost lives. But you brought not justice or mercy, only fear and hate. My sin was accidental. But you chose to scourge me, expel my parents, and burn my homestead.” The bright blue barrel radiated wintry cold, but the ebony light oozing within stole the Reverend’s eyes. He finally coughed one word.

The blast deafened her as it took off the Reverend’s head in an inverted lightning bolt, dark coruscations and blue sparks lancing through dusklight. He limply fell back. Maria turned away, speaking to her memory of the wolf she had slain.

“You killed that child, Reverend. I am a woman … a woman tired of fear … a woman who knows that the right and the law are not always the same. More of your flock seek me. Some may find me. But I have a new family. They see past the dark curse to the strong heart that wields it.”

Maria noticed angry red lines racing through the splinters on the floor, and she retreated. The building eagerly dissolved into a raging bonfire in less than a minute. She used the flames at her back to illuminate the withered trees nearby, seeking Barton’s horse. He’d want it back.