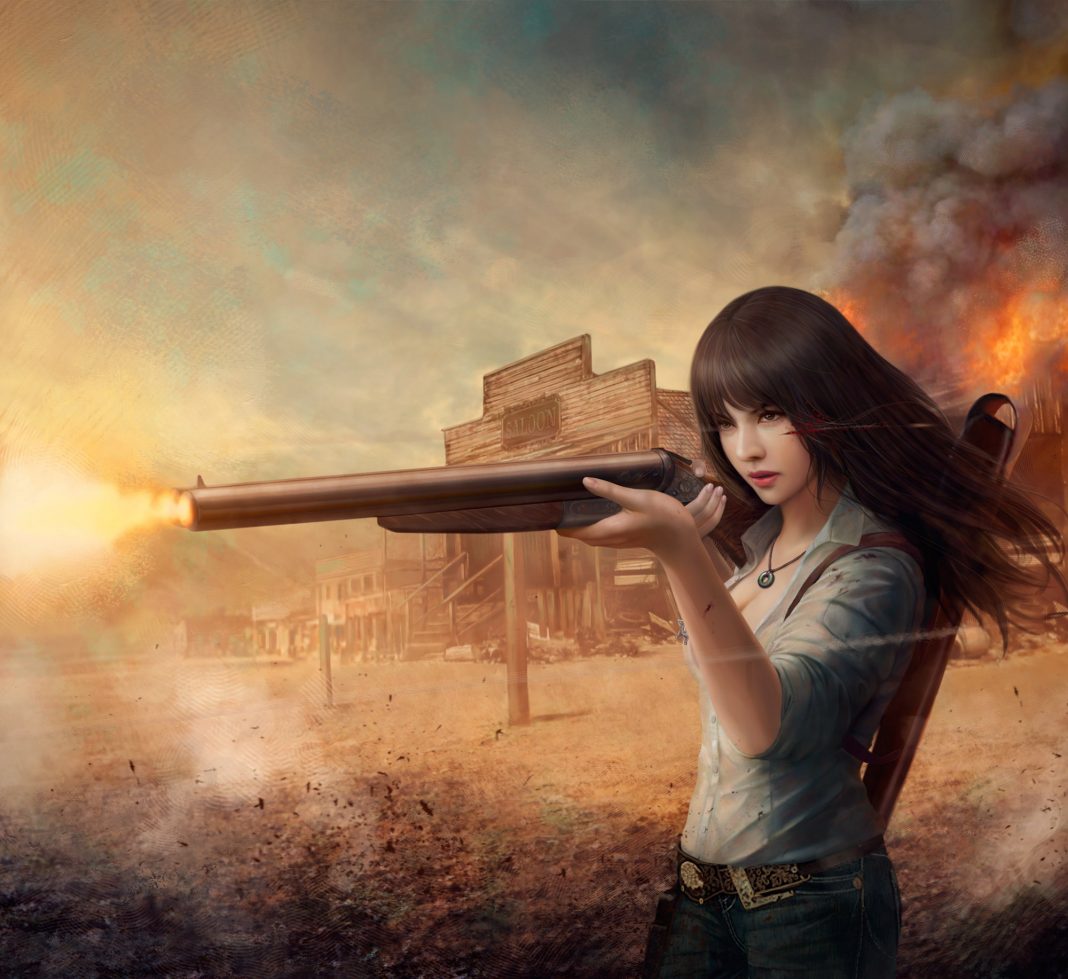 Kevin Wainwright watched the smoke plumes rising, clouding Gomorra’s sunset. Ivor Hawley’s transformation had panicked the would-be posse. The fleeing mob no doubt thought that they’d find safety from the Fourth Ring and its leader. “It is all so easy, Ringmaster,” he said.
“ ‘Easy’ would have been if they’d simply let my plague overrun Gomorra,” Ivor replied to his diminutive assistant. “Of course, pulling out all the stops at once carries its pleasures as well. Regardless, Gomorra’s time has come.” His demonic form rippled and shimmered in the late afternoon sun.
“5:32 on the dot,” Kevin said as he pulled his pocket watch to the end of its silver-chained fob.
“Ha! I like that. We should make it this town’s obituary. ‘Gomorra, California. Its time was 5:32 P.M.’.” Ivor grinned from cheek to outstretched cheek. “Come along, Kevin! We’d better get going. We wouldn’t want to miss our grand finale, would we now?”
* * *
“Dunno guys, they don’t look friendly,” said Maria Kingsford.
“Who does anymore? Gomorra’s gone loco,” Pancho Castillo replied.
Three disheveled figures staggered down the street: two men, one woman, scrawny limbs covered in boils and open sores. Pained moans alternated with raspy breaths.
“Who cares? We’re going through ‘em,” said Jack O’Hara.
“Them folks ain’t why we’re here. We need to find Sloane,” said Maria, turning back the way they’d come. The plague-affected trio noticed Pancho and Jack. Their ragged breathing gave way to enraged screams as they charged, despite their emaciated state.
“No matter.” Drawing a Lemat revolver, Jack fan-fired as he advanced.
Pancho drew his six-shooter, but held fire as Jack’s headlong rush precluded a safe shot. Two of them dropped, twitching and shrieking in pain. The rightmost man snarled, extending his arms to grapple his foe. Jack lowered his head and thrust a shoulder into his assailant’s
stomach, bowling him over. Spinning around, Jack paused only to switch the firing lever up. Grapeshot from the smoothbore barrel scattered throughout the man’s chest, sending him sprawling on the dusty alleyway.
“Look out, Jack, there’s another one!” Pancho’s shot rang true, but not before the attacker
tackled Jack to the ground, raining frenzied, clawing blows upon him before clutching his windpipe. Pancho fired again and she fell dead atop the equally lifeless O’Hara.
Shocked by the sudden turn, Pancho staggered into some stacked casks. Looking around, he realized that this was the same street where he had escorted Maria on their ill-fated walk. The dynamite… Retracing his steps, he side-stepped debris to return to the hideout’s entrance, now a smoldering hole in the ground. A shadow lurched towards him.
“Jimbo Mooks?” Pancho asked as he recognized the Sloane Gang member who had disappeared weeks ago, now barely recognizable with scaly skin and distorted features. “Jimbo, es su compadre, Pancho.”
Jimbo’s head thrashed from side to side, drool and spittle flying in all directions. There was no sign of recognition in his eyes or anywhere else. That stink, thought Pancho, dodging the big man’s clumsy swing. While Pancho fought down the urge to vomit, a second lunge found Jimbo grabbing Pancho’s serape. Pancho rolled into the grapple, avoiding the stranglehold, but Jimbo’s bulk pinned him. A slight push shifted the big man’s weight enough for Pancho to roll free. He scrambled away, but Jimbo grabbed one of Pancho’s legs. Another sideways twist, and Pancho managed to pull his gun.
“Dios, ten piedad,” Pancho said as he finished off what was left of his friend.
* * *
Twin shotgun blasts rolled into one full-throated roar. Xiong “Wendy” Cheng ejected the spent shells and reloaded the chambers with a weary, but instinctive rhythm, as she recalled evils and horrors that haunted her dreams the past two years. The Whateleys and their Hell-spawned cousins. Again, Wendy fired, dropping yet another of the mutations crawling from the numerous tunnels that exploded open a short while ago.
Knicknevin.
Still the nightmares kept coming.

These were the citizens of Gomorra, citizens who trusted me. What are they now?
Weeping in frustration, Wendy slumped and braced herself against an awning post. She fumbled for more shells, sweat causing them to slip as she reloaded. Two more blasts, two more of them staggered and fell.
Still the nightmares kept coming.
Now evil has the face of Ivor Hawley. But what was that face? Charming ringmaster or fearsome demon? Why, oh why, did he bring that circus to plague Gomorra?