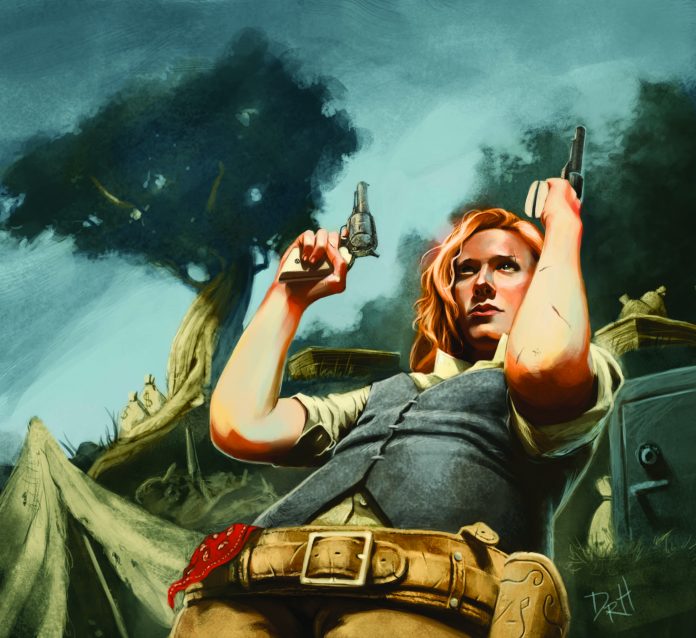 Allie had gotten word to Jonah of a coach coming through, delivering to the Morgan Cattle Company in the early evening. That was likely the last thing that went as planned.

The first hitch was Pancho’s disappearance a couple hours before the robbery. Short-handed, Sloane picked Silas as a replacement. Both men were more than capable with a gun, but Silas was a bit more severe, especially when things concerned his younger brother, Fred.

The second was that the coach was late. Lying in wait to rob a coach was never a fun prospect, but when the coach is a couple hours late it makes it even harder. Bodies get sore and tired of waiting … and people get curious. Lane Healey had been up and down the main road on horseback a few times, looking for signs of the coach.

The third problem was the cargo; it seemed to all be parts for some kinda machine. None of them knew what.

“This is crap. Why would Morgan want all this stuff, and not have any money on board?” Fred asked angrily, as he kicked a wagon wheel. “I say we burn the coach. Morgan thinks they own this town; let’s show them we own the valley!”

“No,” said Sloane. It wasn’t loud, but it quieted them up like it had been a gunshot. “We’ve sent enough of a message. We still need whatever the driver is trying to hide from us.”

“Ma’am, no ma’am! This’ere’s all I’m carryin’!” The driver spat out, perhaps a little too quickly.

“I doubt that. If Sloane says you are hiding something, then it is likely you are.” Jonah said sneering.

“Sloane? You guys are the Sloane gang?”

“In the flesh, pardner.” Silas remained calm, gun trained on the man.

“But I thought Sloane was a man?”

Sloane smiled and stepped forward. “Don’t believe everything you read in dime novels. Except the part about me always getting away and killing folks who don’t cooperate.”

The driver gulped audibly. “I’m gonna lose my job if Healey finds out about this… but it ain’t worth dyin’ over. There’s hidden storage under my seat.”

Everything was still for a moment except for the silently swirling dust.

Jonah considered his next move, as Silas grabbed the man pulling him down. Fred jumped up and examined the seat. “It’s locked. You got the key?”

“No, they told me someone in Gomo—” The man was cut off as the butt of Silas’s pistol slammed into the back of his neck, sending him into a barely-conscious daze.

“Stop, I shall open it.” Jonah knew if he didn’t step in, Silas would beat on the driver further, inciting the law even more than necessary. Jonah’s eyes glowed unnaturally, and a series of playing cards appeared, as if by magic. Which in a way it was, Jonah was a huckster. The lock clicked and Fred opened it.

“Woo-eee! Got a big box of the rock, and a pouch full of US money. Probably five hundred bucks!” Fred announced.

Sloane stepped forward, “Take the ghost rock, leave the money. The rock is worth far more, and I wanna follow up on a hunch with Allie in a few days.”

Jonah looked into the distance, “Someone will be coming soon.”

The driver, still groggy reached into his coat, grabbing at something.

The shot rang out through the valley as smoke rose from the tip of Silas’ pistol. The driver was dead.

“You idiot! They will now ride harder, and you’ve made us murderers. Over what?” Jonah said, through gritted teeth.

Sloane scowled as she knelt next to the body. Blood smeared her knee, and her holster. She reached into the man’s coat: no weapon, just some papers. Sloane looked them over and smiled.

“Time to go,” Jonah commanded to Fred, who was tying a red bandanna onto the spoke of a wheel.

The four mounted up and rode out, back toward their camp. Jonah maneuvered his horse alongside Sloane’s. “The papers?” Sloane passed them over to him. “A deed… to the city of Soddum? So, they were planning to chase us out.”

“They would have failed. But now that we have the deed, it’s our city.” Sloane said. Jonah watched as Sloane smiled and rested her hand on her holster.